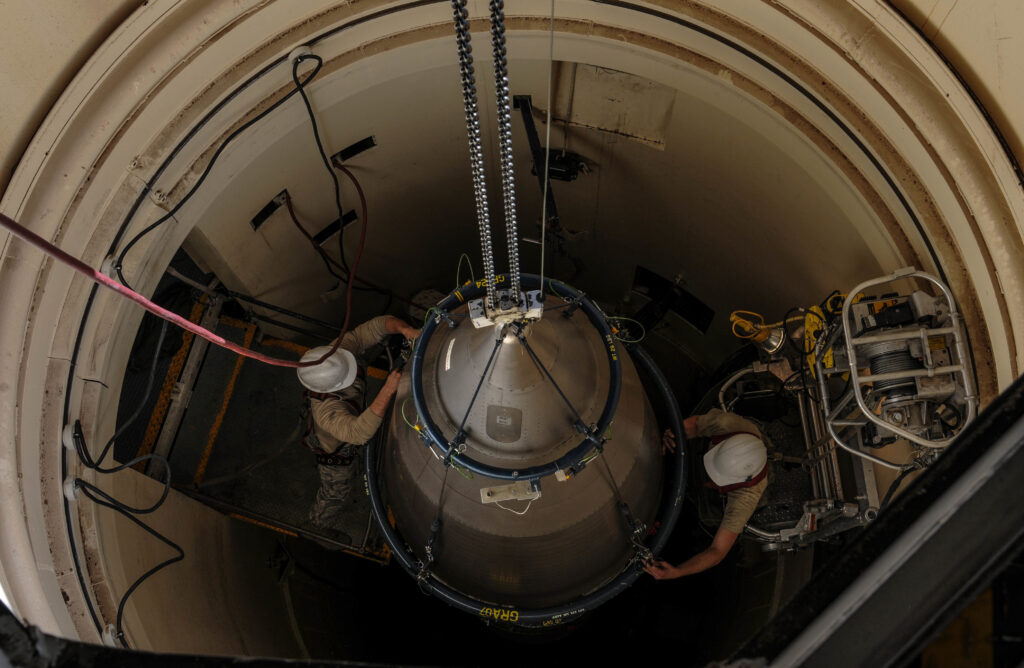 Why is the U.S. Still Building ICBMs?

Although Intercontinental Ballistic Missiles (ICBMs) are often touted as an essential part of the United States’ nuclear deterrence apparatus, they don’t actually make us safer. ICBMs are kept on high-alert and must be launched quickly in a crisis to be effective, greatly increasing the risk of an accidental nuclear war stemming from a false alarm. Additionally, a nuclear dyad consisting of nuclear armed bombers and submarines rather than the traditional triad would be just as, if not more, effective for deterrence.

According to ReThink Media and Federation of American Scientists, 60% of Americans support significant change to nuclear policy ranging from forgoing development of a new ICBM to eliminating nuclear weapons altogether. Yet, despite the many reasons to scale back the ICBM program, the Pentagon is currently planning to develop and deploy a new ICBM known as the Ground-Based Strategic Deterrent (GBSD) that would cost $264 billion over its lifetime. Why spend so much on a system that is both ineffective and dangerous? The answer is, in large part, the ICBM lobby. A new report from the Center for International Policy’s Arms and Security Program where I work goes into great detail about the campaign donations made by the ICBM lobby.

Montana, North Dakota, and Wyoming all host ICBM bases, and Utah hosts sites for their maintenance and development; the senators from these states make up what is known as the ICBM Coalition. The coalition members as well as senators who sit on committees relevant to ICBM policy have been recipients of millions of dollars in donations from defense contractors over the past decade. These senators fight efforts to reduce the size of the ICBM force including taking an active role in supporting the production of the new GBSD.

ICBM bases make up large sources of both military and civilian employment in the states where they are located. The ICBM base in Wyoming, Frances E. Warren AFB, is the state’s single largest employer. In North Dakota, Minot AFB makes up 1.5% of the state’s employment. Northrop Grumman, the defense contractor that will be responsible for building the GBSD, has claimed that this will lead to the creation of 10,000 new jobs, although they have not provided any documentation to detail that claim.

Senators are understandably wary of causing job losses in their states, but the reduction of the ICBM program need not lead to permanent negative impacts on the job market. While a base closure can lead to job losses in the near term, many communities that lose a military base eventually more civilian jobs than before. The Department of Defense has the Office of Local Defense Community Cooperation (known until recently as the Office of Economic Adjustment) which is designed to help communities transition after a base closes. The office has done a report on successful base closures examples that found that there was a net increase of 157,000 jobs in roughly three dozen locations when closed military bases were adapted to civilian uses.

Defense contractors devote a great deal of time to pushing ideas about the economic importance of ICBMs. As mentioned, the senate’s ICBM Coalition is the target of significant lobbying and campaign contributions from contractors who build ICBMs. Chief among these is Northrop Grumman, which holds a $13.3 billion sole source contract for the GBSD. Over the past 10 years, Northrop Grumman and its subcontractors have given over $1.2 million dollars in donations to member of the ICBM coalition and over $15 million to congress members on committees relevant to ICBM policy such as the Armed Services Strategic Forces Subcommittees, and the Defense Appropriations Subcommittees.

Many of the people these contractors hire as lobbyists formerly held significant positions in government or the military such as the chief of staff for former Senate Majority Leader Trent Lott (R-Mississippi) and a former Colonel who commanded an ICBM squadron in Montana. The ICBM lobby has been very successful in ensuring that ICBMs continue to receive funding. In 2019, they were even able to prevent an amendment to the National Defense Authorization Act (NDAA) that would have funded a study into the feasibility of extending the lives of already existing Minuteman III ICBMs.

As Arms and Security Program Director and author of Inside The ICBM Lobby William Hartung includes in his report, there are several policies that could be implemented in order to improve our national security without threatening the economic wellbeing of the localities where ICBMs are housed. One is to forgo the building of any new ICBMs and focus on maintaining and refurbishing those already in existence. This would not cause economic damage as the bases that already house ICBMs would remain in operation. It is also important that the federal government provide assistance to communities that might be affected by changes in ICBM policy. Last, it is vital to reform campaign finance and lobbying regulations to reduce the influence contractors have over policy. These recommendations and others are detailed in the Arms and Security Program’s full ICBM report. The ICBM lobby spends millions of dollars making sure that we continue to build new ICBMs that are dangerous, costly, and unnecessary. It’s time to end their stranglehold over our nuclear policy in the interests of creating a safer world.