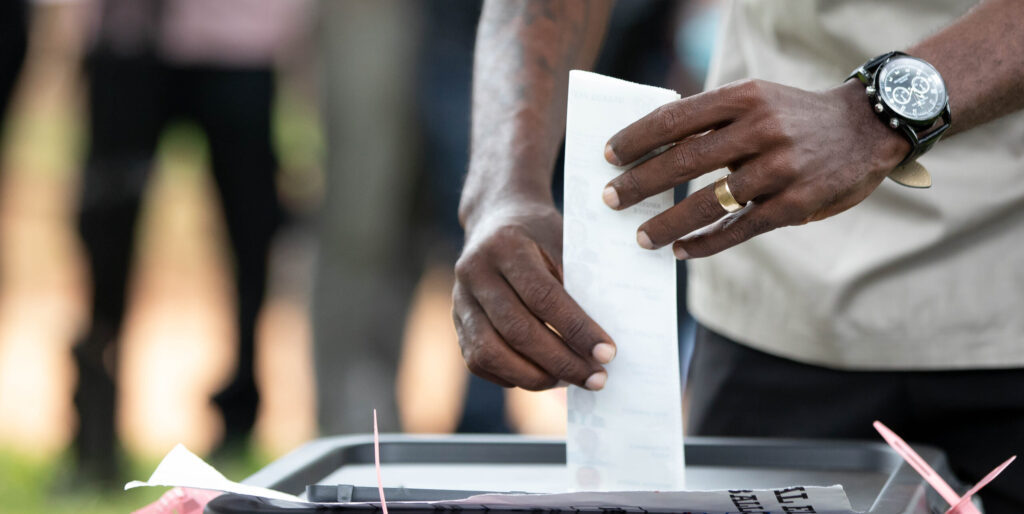 Democracy has been declining throughout Africa. Recent elections in countries such as Uganda, Guinea, Tanzania and Ivory Coast, which experienced rigged elections, constitutional changes and violence, reflect this decline. If 2021 continues as it’s started, it will be another election-filled year for the continent, which has 13 planned national elections. These challenges reinforce the need for African governments and civil society — along with their international organizational partners — to prioritize strengthening free, fair and safe democratic processes across the continent.

Supporting democratic forces in Africa is an ideal way to improve election processes, but given the US’ own weaknesses with voter suppression and related issues, how can Washington help?

This January, Uganda kicked off Africa’s 2021 elections with a particularly brutal and disappointing campaign season and outcome with Pop-star and politician Bobi Wine running in an attempt to unseat President Yoweri Museveni from his 35-year-rule. The human rights abuses that Wine faced at the hands of Museveni and the military during his campaign prompted an African non-profit organization to lodge a complaint with the International Criminal Court. Despite Museveni’s authoritarian and violent leadership techniques, the US has helped him stay in power through the nearly 800 million USD in aid a year between 2016 and 2019 alone.

However, the human rights violations that took place did cause the US to consider actions against its longtime ally and aid beneficiary. On April 16, the State Department announced that it will be imposing visa restrictions on Ugandan officials who undermined “democracy and respect for human rights” during the country’s most recent elections. This response from the Biden administration may become the template for its emerging policies in supporting democratization and elections in Africa.

Somalia’s elections were scheduled to occur after Uganda’s on February 8, but were ultimately postponed due to political conflict among different factions within the federal government: the political opposition and security forces, which the United Nations has condemned. The country’s president Mohamed Abdullahi Mohamed, also known as Farmaajo, signed a law to extend his term — which ended in February — by another two years, a move that has been threatened with international sanctions and has faced condemnation from the US and EU.  This effort by Farmaajo further strained the already fragile political situation in the country and ignited violent clashes in Mogadishu, the worst political violence the city has seen in years. In response, Farmaajo backed off and called for elections to be held to ease tensions created by his term extension.

In response to Farmaajo’s extension attempt, U.S. Secretary of State Antony Blinken stated that the US would reconsider its bilateral relations with Somalia including “diplomatic engagement and assistance” and consider tools such as sanctions and visa restrictions. The US has a long history of military presence in the country and has been working to defeat al-Shabaab for over a decade. The U.S. troop presence of the past 4 years came to an end under President Trump when he withdrew around 700 US personnel less than a month before the initial date for national elections.

Somalia’s current lack of political and security stability despite the U.S.’ military interventions and security sector assistance since 2007 point toward the negative impact that U.S. policy has had on the country; instead of working toward political reconciliation between Somalia’s main parties, US policy focus was victory over al-Shabaab. This lack of reconciliation over the past decade has contributed to the current instability Somalia is witnessing today. Farmaajo has asked the African Union to facilitate “a Somali-led and Somali-owned engagement process that would lead to dialogue” on how to hold timely, peaceful and inclusive elections. His recent decision to back down from efforts to prolong his rule is a promising move that the US should support. The use of sanctions, visa restrictions and the reconsideration of diplomatic engagement and humanitarian assistance, as well as restricting military aid and training, should still be considered by the US as tools to support the implementation of fair elections and a process of political reconciliation in the country.

Finally, while Niger, Republic of Congo, Djibouti, Benin and Chad have also held elections this year, the tensions and conflict created by Chad’s election followed closely by the death of its President Idriss Deby require the most US foreign policy attention right now. After winning his sixth term to continue his 30-year-rule as one of Africa’s longest serving leaders, Deby died while on the frontline against rebels pointing toward the dire situation in the country. In 2018, Deby modified the constitution to allow him to continue to hold office until 2033 and the rebel group he died fighting against was unhappy with Deby’s election repression. Despite Deby’s human rights violations and oppression of the opposition, the US has long supported his administration because the Chadian military is viewed as an ally in the U.S. counter terrorism campaign in the Sahel region — as well as fighting Boko Haram in Nigeria. The recent developments in Chad exemplify the danger in the US supporting leaders who act with impunity; if regional unrest is to unfold as a result of the instability in the country caused by Deby’s death, the US will be complicit.

Africa’s 2020 elections demonstrate the importance of countries respecting constitutions, providing secure access to information and the internet, allowing freedom of the press and more. While countries like Seychelles maintained peaceful legislative and presidential elections, those held in Guinea, Tanzania and Ivory Coast were highly polarized and marred with political violence.

Across Africa, ruling parties have sought to prolong their grip on power by modifying, re-interpreting or, as was the case in the run-up to election in Guinea and Ivory Coast, ignoring constitutional term limits. In all three countries, tactics such as harassment and violence directed toward the opposition were used by incumbents to remain in power and undemocratically influence election results in their favors. A grossly unfair advantage was given to the late Tanzanian incumbent, President John Magufuli, when the state authorities restricted internet and social media access in the lead up to election day. Magufuli passed away on March 17, just five months after he took office for this second term.

Guinea, Tanzania, and Ivory Coast each experienced instances of violence surrounding their elections. Guinea’s controversial election resulted in unrest that killed at least 10 people according to Amnesty International.  This unrest was fueled by President Alpha Conde’s disregard of Guinea’s 2010 constitution which states that the President’s term is 5 years and only renewable a single time. In March 2020, President Conde, who had already been in power for 10 years, organized a national referendum to amend the constitution to allow him to run for a third six-year term, with the potential for him to govern for 12 more years due to this constitutional reset. Although 92 percent of voters cast their ballots in favor of this new constitution, it was reported that 2.5 million unverifiable names had been scrubbed from the electoral register in the lead up to the referendum. On November 7, after several days of awaiting the election’s result, the Constitutional Court confirmed that Alpha Conde won the presidential election with 59.50 percent of the vote and would serve a third term of six years.

Tanzania  experienced violence before and after its election day, causing the United Nations High Commissioner for Human Rights’ to release a statement urging the Tanzanian government to abide by the “rule of law and human rights norms and standards.” Following the October elections in which the late President John Magufuli won a second term, there were reports of “intimidation and harassment against leaders and members of the opposition.” This included the detention of opposition figures by the government to silence those who challenged the results due to widespread allegations of rigging. Free speech was restricted by government actions to block social media websites and election coverage was limited following new laws that required international radio and TV broadcasters to have licensed local partners to be eligible to air content.

Lastly, in Ivory Coast, where the constitution limits Presidents to two consecutive terms,  thousands fled the country after President Alassane Ouattara won a third term in a disputed vote. Democracy was further weakened by the low voter turnout prompted by opposition calls to boycott the vote and international observers announced that the election was not a fair competition.

There will likely be negative consequences for countries that flouted democratic principles during their elections as unstable political terrain make it difficult to attract international investment and trade to these countries, a factor that might undermine these countries’ participation in the Africa Continental Free Trade Area that came into effect at the beginning of this year. Furthermore, political violence coupled with the COVID-19 pandemic only creates more dire situations for these countries’ citizens and additional challenges for the implementation of urgently needed healthcare programs.

How the US can Promote Democracy in Future African Elections

It is essential that US foreign policy toward African elections focuses on ensuring internet access, using security sector assistance as leverage and implementing greater congressional oversight and diplomacy toward elections. In addition, sanctions, visa restrictions, political reconciliation and boycotting unfair elections and leaders are other important tools that can be used.

Although social media can be a source of misinformation, it is a powerful tool that allows citizens to exercise their right to free speech, to gain access to important election-related information, to mobilize voter turnout, and to plan together. The US can help protect African citizens’ rights by pressing countries to stop restricting free speech and internet access in the lead up to elections and threaten targeted action (sanctions, visa bans, etc.)  against officials who undermine free speech.

In countries where the U.S. provides security sector assistance, the U.S. government can use the Leahy Law as leverage to promote and protect human rights when there is evidence of police or military abuse of citizens’ rights. The U.S. should automatically review and reconsider all security sector assistance and arms sales to countries whose elections are neither free nor fair.

The U.S. Congress and its executive branch should be more engaged in supporting improved African elections and electoral processes through public hearings, fact-finding, and observer missions. They should also collaborate with activists and politically engaged African diaspora organizations who can speak to the state of democracy and how the U.S. can help promote democracy within their respective countries.  There also needs to be a stronger US response when incumbents seek to change constitutions in the lead up to their country’s elections, such as what happened in Guinea’s latest election, or when incumbents simply defy the constitution, as in the case of Ivory Coast.

2021 is yet another major election year for Africa. If the US wants to be considered a global leader in support of democratization under President Biden, these recommendations are a major starting point. Engaging with African leaders and civil societies as a partner who supports the will of the people will help to protect human rights and strengthen free, fair and stable elections on the continent.