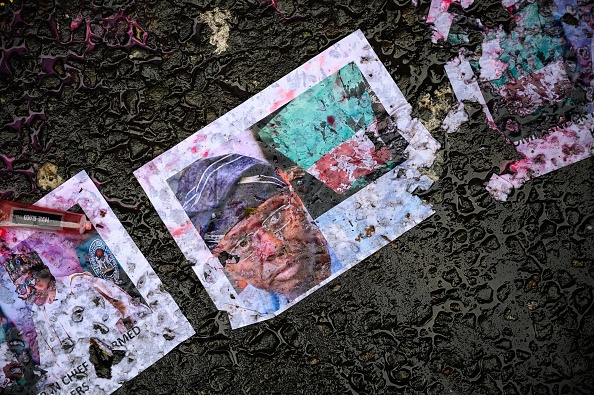 Civil society space and human rights have been on the decline in Nigeria for over a decade. According to the Mo Ibrahim Foundation’s Index of African Governance which ranks countries annually, Nigeria’s  good governance ranking has continuously plummeted over the past ten years and the decline rate has increased the past five years. These trends mean that the Buhari administration’s June announcement of its indefinite ban of the social media giant Twitter was not completely surprising. Africa’s most populous country has now joined the ranks of China, North Korea, and Iran — countries that have all banned the platform as well.

The #EndSARS protests in October 2020 targeting police brutality and corruption showed the world how Nigerians feel about not only the current administration, but the country’s flawed political system at large: frustrated. This sentiment is fueled by the Buhari administration’s authoritarian behavior and inability to provide a livable environment for its people. Key issues include bad governance, police brutality, human rights violations, insecurity, and a range of economic issues caused in part by the country’s over-dependence on oil and widespread corruption.

US foreign policy-makers should respond to this unconstitutional move, which the Economic Community of West African States (ECOWAS) Court of Justice has ruled against. The obstruction of freedom of speech coupled with mass insecurity are dire threats that can destabilize the country’s democracy in the lead up to the 2023 presidential elections. By supporting Nigerians’ human rights, the US can become an important and needed ally for individuals and organizations within Nigeria trying to keep the country’s democracy alive.

Autocratic actions like the Twitter ban show that democracy is at risk, making the 2023 elections extremely fragile — because Twitter and other social media platforms are a tool for citizens to spread voting and election information — and important — because they offer an opportunity to potentially elect accountable and representative lawmakers who can help alleviate Nigeria’s problems and reverse its democratic decline. In a country where nepotism and corruption run rampant, this will be an extremely difficult task and will require the support of democracies globally like the US.

Policy strategies like sending election observers, applying leverage and pressure in the lead up to the elections if undemocratic behavior is witnessed and working closely with Nigerian NGOs and civil society groups focused on elections and their ally organizations in the US will be key. In addition, supporting a stronger electoral system and voter registration; engaging in public diplomacy by continuously discussing freedom of speech violations like the Twitter Ban; using targeted sanctions against individuals guilty of human rights violations; and reducing military aid in light of police brutality, #EndSARS, and the Lekki Tollgate Massacre will also send a clear message about the importance of democracy and human rights. Elections don’t take place on voting day, they take place in days, months and years leading up to election day–this is the time period when leaders are arresting the opposition, limiting freedom of speech and implementing undemocratic changes within the law. Proactive US engagement now can help reduce the effect of the Nigerian government’s electoral undermining strategies in the lead up to 2023. Although the US is fighting to strengthen human rights and equality at home, its foreign policy approach should be a collaborative one, meaning that they are fighting for these changes both domestically and internationally.

The Twitter ban was officially announced on June 4, 2021, with Minister of Information and Culture Lai Mohammed accusing the social media company of being used for activities “capable of undermining Nigeria’s corporate existence.” The decision to ban Twitter came two days after Twitter deleted a tweet by President Muhammadu Buhari that seemed to threaten violence against Biafran secessionists blamed for attacks against government targets in southeastern Nigeria.

The move sparked immediate outcry and resistance with #KeepItOn trending on Twitter as Nigerians flocked to virtual private networks (VPNs) to evade the ban. Demand for VPNs spiked 1,409% in Nigeria on June 5, the day the ban came into effect, and rose an additional 405% on  June 6 as the shutdown extended into its second day. Nigerians also took to the streets, with protests taking place in several cities across the country on June 12 to coincide with Democracy Day, which marks the anniversary of the 1993 democratic election, the freest and fairest election the country has ever held, the results of which were subsequently annulled by the ruling military junta.

The demonstrations were also in protest of the Buhari administration’s poor management of the country’s biggest challenges, including insecurity, high food prices, and a range of unconstitutional policies, especially the recent Twitter ban. The Nigerian Police fired tear gas and arrested several protesters in Lagos and Abuja; however, protesters throughout the diaspora, in cities such as London and New York, were able to express themselves freely.

While ECOWAS has ruled against the Twitter ban and stated that the Nigerian government should stop the prosecution of Twitter users until the hearing for the Socio-Economic Rights and Accountability Project’s (SERAP) lawsuit against the government, the House of Representatives rejected the motion to lift the ban on July 1 after the Speaker of the House asked for the ban to be investigated.

As these developments demonstrate, the Twitter ban is deeply unpopular and hard to enforce. As the lawsuit filed by SERAP correctly argues, the ban has “escalated repression of human rights and unlawfully restricted the rights of Nigerians and other people to freedom of expression, access to information, and media freedom in the country.” Nevertheless, the current blackout is just the first step in the Nigerian government’s agenda to restrict internet access more broadly. Days after the ban took effect, Information Minister Mohamed announced a set of new rules for social media companies operating in Nigeria, including requiring that they register domestically and be licensed by the state broadcasting commission.

President Buhari’s administration has also reportedly contacted the Chinese state cyber regulatory body to discuss developing a nationwide Nigerian internet firewall similar to China’s “Great Firewall.” If implemented, such a firewall would create a separate “Nigerian internet” over which the government would have extensive censorship powers, including the ability to block VPNs and additional social media platforms like Facebook, Google, Instagram, and WhatsApp.

Nigeria is not the first African nation to recently limit its citizens’ internet or social media access. According to data from watchdog group Access Now, at least 13 countries on the continent have implemented full or partial internet shutdowns in the first six months of 2021, as did around a dozen in 2020. Uganda notably put in place a nationwide blackout on the eve of its presidential election in January of this year which subsequently affected citizens ability to access social media. Tanzania also restricted access to the internet and social media platforms during its elections in October. Other countries that blocked internet access in 2020 include Chad, Burundi, Ethiopia, Guinea, Mali, Togo, and Zimbabwe. 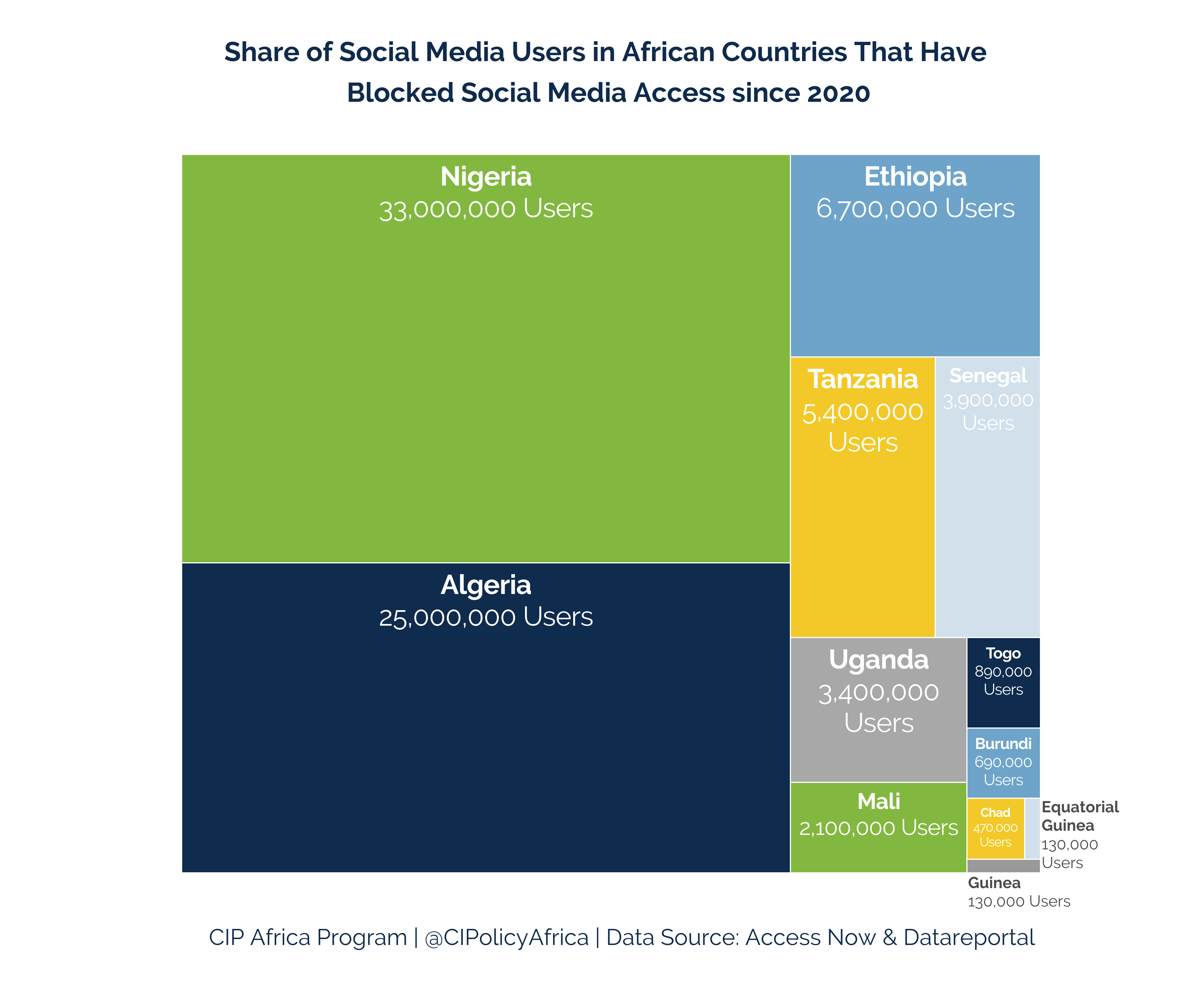 Implications for the future

While social media users make up a small minority of Africans, they have an outsized political and social influence. As of 2019, 39.5 million — out of a total population of 200 million — Nigerians have a Twitter account, but they are one of the most vocal and engaged segments of society, and trends among online activists have often had tangible political impacts in recent years.

With the rise of the internet, Africans have been presented with a powerful tool for sharing information and holding their governments accountable. VPNs and other mechanisms have often allowed internet users to avoid attempts by African governments to block online access. However, that may be changing, as recent years have seen increasing numbers of African governments trying their hand at blocking the internet. In the future, if Nigeria is any guide, more countries may graduate from targeted and temporary shutdowns and begin seeking out larger-scale measures, like firewalls and VPN blockages. If they do, the silencing effect on Africa’s next generation of internet activism could be lethal.

What this means for Nigeria’s elections and US policy

Government officials are making additional moves to undermine free and fair elections in 2023. In the Electoral Act Amendment bill that the National Assembly of Nigeria (NASS) passed last week, there is a new amendment to increase campaign expenses from N1 billion to N5 billion for the President, N200 million to N5 billion for governors, N100 million to N1.5 billion for senators and N70 million to N500 million for representatives. Ene Obi, Convenor of the Nigeria Civil Society Situation Room, believes that these increased limits will not only make the monitoring of campaign expenses more difficult, but the prevalence of money in Nigeria’s elections will affect marginalized groups such as women, youth and people living with disabilities because it hinders their inclusion in politics.

The Electoral Act Bill was initially passed in 2010 and its proposed changes, which includes outlawing the electronic transmission of results, have been rejected by President Buhari three times. It is argued that this limitation will undermine the autonomy of the Independent National Electoral Commission (INEC) and its ability to conduct transparent elections and reduce election violence. These moves highlight the importance of the US intensifying its support for Nigerian civil society organizations that have been working tirelessly for years to help uphold the country’s 22-year-old democratic republic that continues to be undermined by the current Buhari administration ahead of the 2023 presidential elections through policies like the Twitter Ban, increases to campaign spending limits, and other authoritarian moves.

The US needs to support human rights policies critical to fair elections: freedom of expression, freedom of political association, and participation and freedom of the press. Social media is essential and central to exercising many of these human rights in the lead up to elections.

US Foreign Policy toward African Elections in 2021by Temi Ibirogba / June 3, 2021